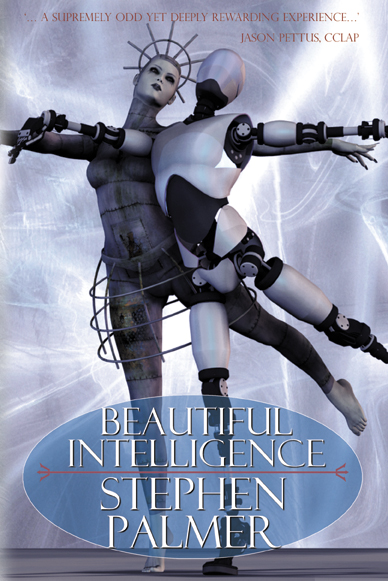 The race to create a sentient machine is headed by two teams, led by former researchers at Ichikawa Laboratories, who escape the regime there – and each other – to pursue their own dreams in the world beyond Japan.

Leonora Klee is creating a single android with a quantum computer brain, whose processing power has never before been achieved.

Manfred Klee is creating a group of individuals, none of them self-aware, in the hope that they will raise themselves to consciousness.

But with a Japanese chase team close on their heels, will either be successful before they are trapped and caught?

Beautiful Intelligence is a fast-paced, philosophical thriller that confronts questions of how we will create artificial sentience, and whether it will be beautiful.

Being & Having In Beautiful Intelligence.

Eric Brown in The Guardian: ‘Stephen Palmer’s marvellous ninth novel, Beautiful Intelligence (Infinity Plus, £8.99), posits a beleaguered 22nd century in which oil has run out, water is scarce, and in a neat inversion of the contemporary world order, Europe is an economic ruin and Africa the promised land. Two techno wizards abscond from a Japanese laboratory, each attempting to develop artificial intelligence according to their own philosophies – one based on the social intelligence theory of consciousness, the other on a linguistic approach – but billionaire tech-mogul Aritomo Ichikawa will stop at nothing to get them back. What follows is a thrilling chase across a ravaged Europe, a burgeoning North Africa and balkanised US, interleaving excellent action set-pieces with fascinating philosophising on the nature of consciousness. A gripping read to the poignant last line.’

Goodreads: ‘This is great SFF with a touch of Cyberpunk and Some great android development with a hint of mystery and lots of suspense so there’s a bit for everyone. Probably not much for the Romance lovers though. If there’s a vote for more of this world and what might happen next I’ll put mine in. A must read and I don’t think you’ll be disappointed.’ (J.L. Dobias) ‘… it can be at times difficult to follow, but even without that background, the chase, the tensions and shifting alliances within the two groups, make for a suspenseful and entertaining story.’ (Teresa Edgerton)

Amazon: ‘Great story. I really like his style of writing and subject matter – science fiction, social culture, post-apocalyptic. This is the second of Stephen’s books that I have read… and it will definitely not be the last.’ (Neil Wilson)

SFF Chronicles: ‘The fact that I found his world setting a very credible extrapolation of where we are right now was quite frightening, and this really helped with the immersion factor whilst reading. All-in-all, it was a well-paced read that definitely deserves a look.’

Gary Dalkin at Amazing Stories: ‘… a bracingly imaginative novel. By choosing to operate within a realistic, post-crash, dystopian Cyberpunkish framework Stephen Palmer has written his most accessible and commercial work to-date… With its narrative spanning Europe, the Middle East, Asia, Africa and North America, a cast of characters which prominently features several intelligent, resourceful women in positive ways, Leonora, Tsuneko, as well as Pouncey, security expert for the BIteam, and incorporating a multi-ethnic cast of characters – Dirk is black, Hound part Turkish – this is a work which looks to a diverse global future with excitement and verve.’

Addaltmode blog: ‘Robot-focused fiction has produced plenty of slow-paced thought provoking novels. After all, artificial intelligence is a theme uniquely suited to big, ponderous questions about the nature of selfhood. Robots have also inspired more than their fair share of pounding action sequences, but it’s a rare treat to find a work that combines the two modes quite as well as Beautiful Intelligence does. The chases and escapes – both cyber and physical – kept me turning the pages, but it has been the bigger questions around society and consciousness, as well as Palmer’s alarmingly plausible vision of the future that have lingered on my mind since I finished reading.’

Goodreads: ‘We live in a golden age for innovative and smart science fiction, and Stephen Palmer’s Beautiful Intelligence is a sobering future narrative. Artificial intelligence is the real agenda for these times following the success of the TV series ‘Westworld,’ but Palmer’s book goes deeper into the matter… Beautiful Intelligence philosophizes elegantly and playfully about heavy topics. It is a colourful tale of a grotesque world that may not be as distant as we wish.’

Kobo: ‘Fascinating and engaging view of a future dystopia. The quest for new ways of being is explored through the development of two synthetic intelligences- artificial intelligence and beautiful intelligence. Which will survive? This writer creates an atmospheric environment while dissecting what it means to be human.’